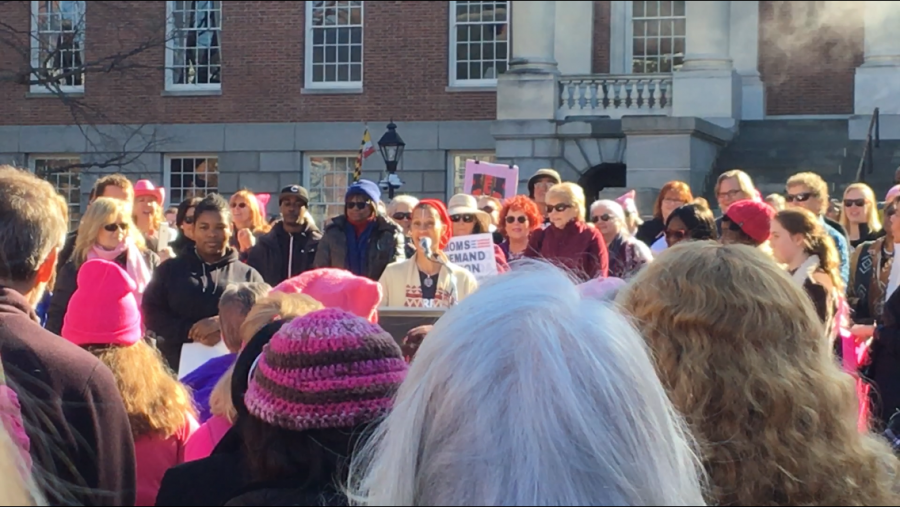 by Beau Cameron and Sarah Brady

On January 20th, The Women’s March Alliance held anniversary marches around the country. Marches took place across the nation, with the “main” event being held in Las Vegas, Nevada. In Maryland, major events took place in Annapolis, Baltimore, and Frederick.

This year, the march focused on voting in the upcoming congressional and local elections. Women’s “March on the Polls” intended to encourage people to vote blue in hopes of turning over congress and holding elected officials accountable for their actions. A voter registration table was set up at the event for attendees.

The Women’s March is, at its heart, a movement of solidarity. People come together to celebrate what they have accomplished and recognize the changes that still need to occur. Beau Cameron and Sarah Brady joined the movement in Annapolis.

At the Annapolis Women’s March, Maheen Haq said, “You do not simply fight for your own community. We are all burning in this melting pot. If tolerance of injustice anywhere is truly a threat to justice everywhere, then silence must be the gravest of sins.”

In her speech, MC Monica Lindsey said, “We the people wanted a more perfect union, and we’re demanding a seat at the table…We will not allow ourselves to be normalized to an abnormal political situation.”

The crowd that showed up to the Annapolis Women’s March was very diverse–people of all ages, genders, races, and religions were in attendance for a variety of reasons.  Though all attendees were from different walks of life, they were united in their belief that the government was not accurately representing their ideas.

Darius Stanton of the Martin Luther King, Jr Committee, said “In America, whenever we join hands-black and white, old and young, Jew and Gentile, Muslim and others–we make a difference.”

Many of the speakers were leaders of community organizations. Their rallying cries were partnered with reminders of upcoming city and county events. The Mayor of Annapolis, Gavin Buckley, said “We are not being defined by fear, and by greed. [You] are defining us by hope and opportunity and justice for all.”

Speeches lasted from 11 am to just past noon, when the march started. It was a beautiful January day–sunny and fifty degrees. Chants were scattered; marchers yelled phrases like “normalize love,” “This is what democracy looks like,” and “I scream, you scream, we all scream for equality.” Participants marched for roughly half an hour, passing Annapolis locals as they stared, waved, and recorded the marchers.

Attendants signed up at the march to speak at the end. Most of these speakers were individuals running for office in Maryland. Though, others were simply students or women who felt the need to add their own stories about why they marched.

Last year, the first Women’s March in Washington inspired sister marches in every state in the US and in cities around the world. An estimated 4 million people marched nationwide, far exceeding expectations. Occurring the day after the inauguration of President Donald Trump, the march came to be about all the systems that threaten women’s equality, health, and human rights.

There are currently no plans for a 2019 Women’s March, but given the response that the past two years’ marches have received, it is safe to assume that the movement will remain an annual event.