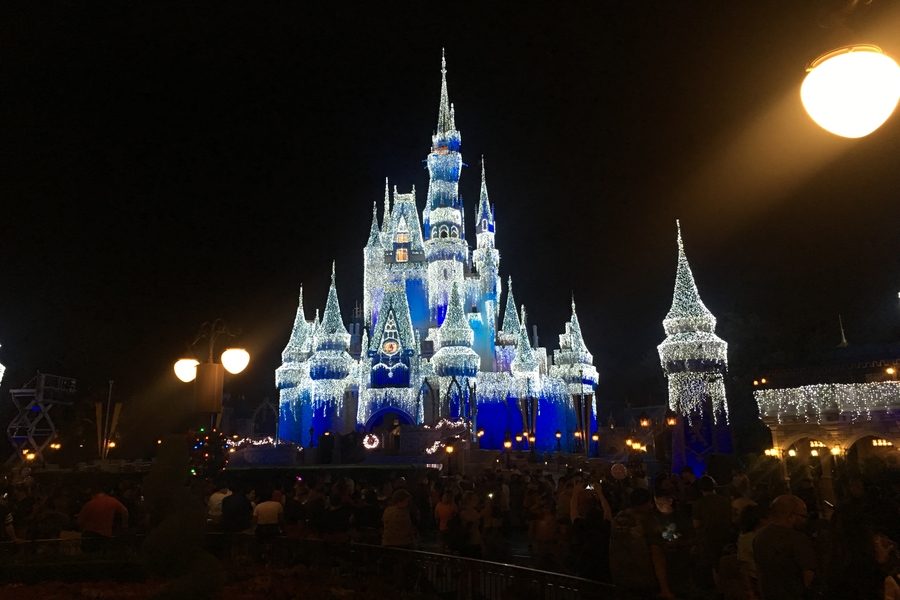 The illumination of Cinderellas castle in Magic Kingdom

I used to make fun of people who worshiped Disney World. They’d say things like how their whole family goes every year and that they all wear matching shirts with Disney characters on them.

Now that I have been to Disney with the marching band and drama, I am a Mickey ear wearing, FastPass preparing, super fan!

In early November, the drama students attended exclusive behind the scenes activities and events, getting a chance to see how the magic of Disney is made. Drama students participated in a Beauty and the Beast workshop with cast members from live performing show in Disney, ate at the Hoop-Dee-Doo Musical Revue with former cast members who were in the dinner show, and went to an exclusive dessert party accompanied by fireworks.

It was Smithhisler’s first time organizing a trip to Disney, but she is familiar with planning because she has taken the drama department to NYC.

Micheal Copen said, “I’ve been very fortunate in 20 years of Disney planning to make some really special and close friends at Disney over the years.  They help me create some really special opportunities for my groups like meeting actors and performers after shows and getting to meet the “Big Cheese” himself!  They all really believe in the Arts in Schools, and they try to pay it forward as well!”

Sixteen LHS students stayed at the Pop Century resort in the 80’s section: the resort has three pools, an arcade, a food court, shopping area, and plenty of other activities.

For the first day, students had the choice of going to the Magic Kingdom or Epcot. Students enjoyed rides like Soarin and Test track and walked the World Showcase, visiting countries like Mexico, Canada, and Germany.

Epcot offers a variety of five-star quality food that doesn’t break the bank. In “France,” lobster bisque with a baguette on the side and a crème brûlée for dessert was just $11.00.

Later that night, drama met up with the Oakdale marching band for an exclusive dessert party with front row seats to watch IllumiNations. The show utilizes fireworks, pyrotechnics, lasers, water fountains, fire effects, and searchlights to make this show stand out when compared to the magic of other Disney fireworks shows Fantasmic or the spectacle of River of Lights.

Drama students chose between the Magic Kingdom or the Animal Kingdom on the second day. In the Animal Kingdom the new Pandora rides are the most popular. The Avatar Flight of Passage ride wait times average at around 120 minutes. Walt Disney Imagineers had created a world that was so vast and gripping with all of the sights, sounds, and smells of Pandora.

At night, students went to Disney’s Fort Wilderness Resort to go to the Hoop-Dee-Doo Musical Revue. The Hoop-Dee-Doo Musical Revue is a family-friendly, Wild Western themed show with a southern style meal. This laugh out loud show is packed with singing, dancing, audience participation, and humor for all ages. They bring out delicious fried chicken, barbeque spare ribs, baked beans, corn, and for dessert a moist strawberry shortcake.

The second workshop was in musical theater. Students had to learn how to sing “Belle” from Beauty and the Beast before coming to Disney. Students did a very quick audition for a few select parts and solos in the song. Once parts were cast, Swickard blocked the scene piece by piece until students could successfully run through the scene. After two full run-throughs, parents were invited to come to see and record our performance.

Angela Smithhisler said, “For the 16 lucky students who took part in it, it definitely gives them a huge advantage going into auditions. They were able to learn a song and even perform original choreography. I also was able to pick up a few ideas here and there in viewing the workshop and the master artist who hosted it, so it will help me as a director and choreographer.”

Hollywood Studios is an actors’ paradise with so many live shows to see like Beauty and the Beast and the Indiana Jones Epic Stunt Spectacular!

Once it got dark, drama students met up to head over to Hollywood Studios end of the day show, Fantasmic! Fantasmic features fireworks, characters, live actors, water effects, pyrotechnics, lasers, music, audio-animatronics, searchlights, decorated boat floats, and mist screen projections. This show is a testament to Walt Disney Creative Entertainment and how they are able to combine fantasy and reality into an experience that can only be found at Disney.

On our last day at Disney, students were allowed to do whatever they wanted to do and go where ever they wanted to go within the parks. Some took this day to relax and enjoy spending time at the resort, trading Disney pins and swimming in the pools, while others jumped from park to park trying to get as much as they could out of their last day.