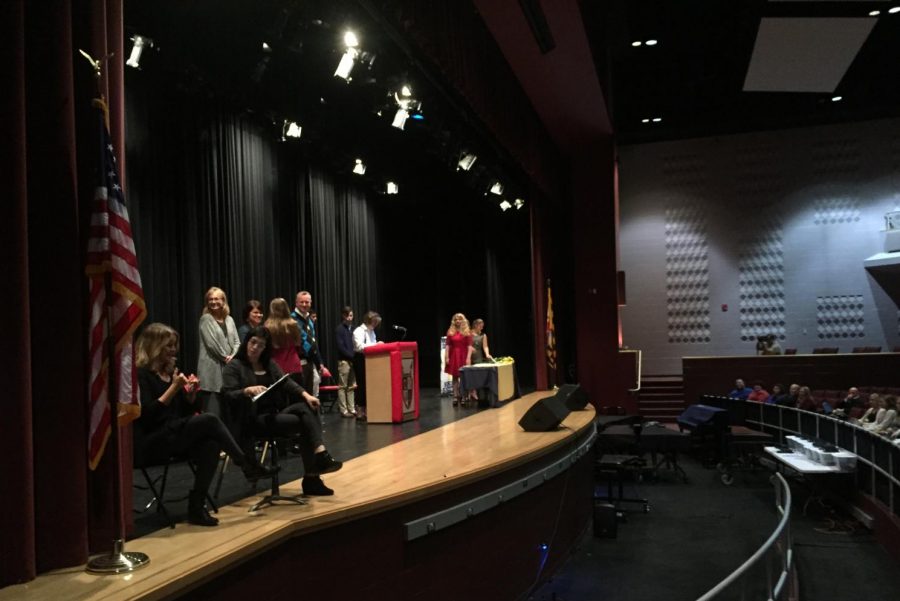 The ceremony began with opening remarks from the advisor, Natalie Rebetsky. Then, officers were confirmed in their positions and given time to talk about the group’s upcoming activities. These activities include celebrating National Poetry Month, participating in a pen pal program with a local elementary school, taking part in Lancer Candy Lane, and many more.

One new initiative is the Frederick County Common Reader Scholarship.  It mirrors the Common Reader Scholarship offered by the national NEHS, but this contest is open only to FCPS NEHS juniors and seniors.  Members must read one of the novels–Everything I Never Told You or The Samurai’s Garden and respond to one of the prompts.  The deadline for the scholarship essay is January 14, 2019.

The Curious Iguana will host two book talks in January to help students prepare for the essay contest.  The book store will offer a 20% discounts to NEHS members who purchase the novels at their store in downtown Frederick.

The most important part of the ceremony is when the new inductees walked across the stage to be officially welcomed into the group. Each inductee had submitted a short biography.  The inductees received certificates and yellow roses.

Class of 2020 new inductee Payton Twiford said, “It was really cool to be inducted with all of my friends. I had fun.”

McWilliams stepped up to the podium at the end of the evening to commend the inductees and told them how impressed he is with their community service and “outward focus” on the world.

“It was very inspiring to see how active and well-rounded all the kids were. I was excited to be inducted. I felt it was an important to show the students that you’re never too old,” said Kirkland.

This year, the number of new members has more than doubled. This is due to the increased publicity and the application workshop the group implemented for new applicants.

“I felt like there were a lot of kids who should have been in it (NEHS) but weren’t because they didn’t know about it. That’s why we held the application workshop, to help students with the application and to get the word out about the group,” said Rebetsky.

The evening was followed by a reception and formal photographs for the yearbook.

The National English Honor Society is only open to juniors and seniors. To apply, one must have an average GPA of 3.0 or higher, have at least an A or a B in their English classes, and display an enthusiasm for language arts and literature. However, club activities are open to everyone, even non-members. Check out the NEHS website for information about various club activities and writing contests.