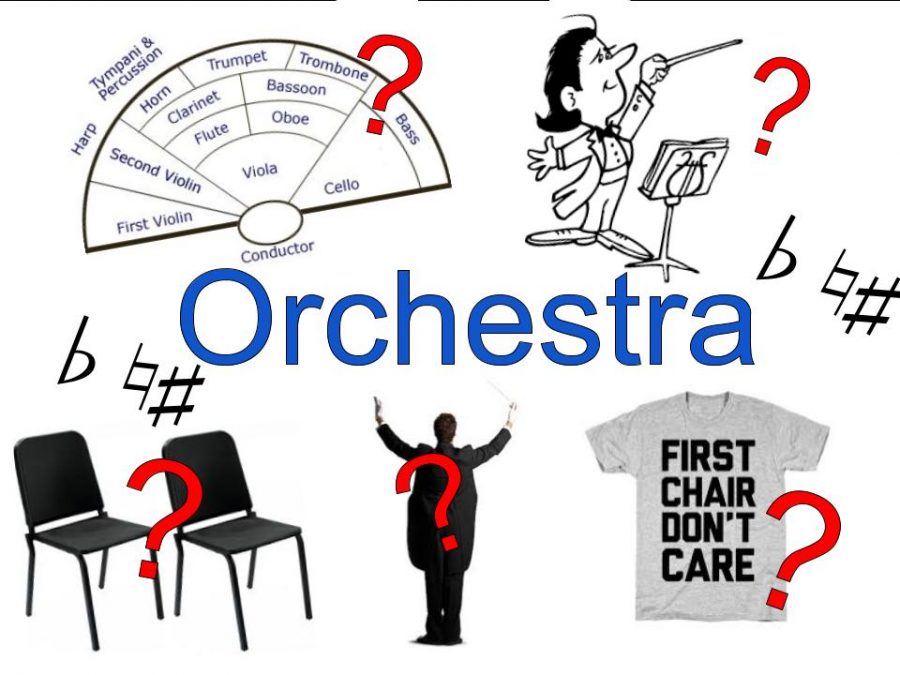 What is orchestra? What are chairs? What is the purpose of the conductor? Read to find out.

by Lauren Hall and Emily Kelly

Linganore is famously known for its marching band, but orchestra is often overlooked. Here’s the inside scoop on what orchestra actually is, how it differs from band, and why students love it.

Mr. Dye, the only orchestra teacher, said “I love the sound of orchestra music. The literature is one of the most beautiful pieces of music there is.”

What is the difference between band and orchestra?

Dye said, “The difference is primarily the presence of string instruments such as cello, viola, violin, and bass.”

Kayli Wenttang, Class of 2018, has been a cellist in orchestra for four years.

Wenttang said, “A lot of people who don’t play string orchestra are also in symphonic band, (which means no strings), taught by Mr. Lloyd.”

According to Dye, “Songs are chosen based on the orchestra’s skill levels as a whole. I like to pick pieces that would be specific to the orchestra and cover a variety of styles. ”

“I like the way Mr. Dye teaches orchestra. He makes things comfortable and people can be open about themselves. It’s not as stressful as orchestra class was in middle school,” said Wenttang.

Hailley Kutchman, Class of 2018, has played the cello since elementary school and transferred to Linganore during the 2016-2017 school year.

She said, “Out of all my experience with orchestra, Dye is the first teacher I’ve had that doesn’t play favorites. Other teachers I’ve had would always ignore the cello section, but Mr. Dye makes every section feel just as important in their contribution to the orchestra.”

What would you say to students considering taking orchestra?

Emily Kelly, Class of 2021, is a guest reporter for The Lance. Kelly has been playing violin for five years and has signed up to join orchestra with Mr. Dye this spring.

Dye said, “Most students start playing their instrument and reading music in elementary or middle school. We recruit potential orchestra students when we play join performances with the middle school orchestras.”

Wenttang said, “To those interested in taking orchestra, I would highly recommend only taking it if you already know how to play an instrument fairly well. The class moves very fast due to a short amount of time to prepare for the spring concert, so there’s not a lot of time to be learning how to play an instrument. I’ve been playing the cello and reading music since the third grade. This made it a lot easier to take orchestra because I already knew how to read music for my instrument.”

What is the purpose of the conductor?

Wenttang said, “Conductors normally conduct with their right hand. When they’re standing in front of an orchestra, the lower-sounding base instruments are on they’re right side. Low instruments need to follow the conductor’s tempo more because they set the tempo for the rest of the orchestra to play accordingly.”

What are “chairs” and how are they determined?

Students in their instrument group are ranked according to one’s playing level. Normally the student placed in first chair (also called the principle) will lead their group, get a lot of solo opportunities, and lead the bowing if they are in the string section.

Students work hard to improve their skills throughout the semester to compete for first chair, which can be changed whenever the conductor sees fit.

Wenttang said, “I’m proud of my progress and having the opportunity to be the only cellist. It gave me a lot of opportunities for solos. We’ve gone to states after adjudication, a county-wide competition, every year that I’ve taken orchestra. Orchestra is something I will miss the most from high school. I’m really excited for the spring concert.”