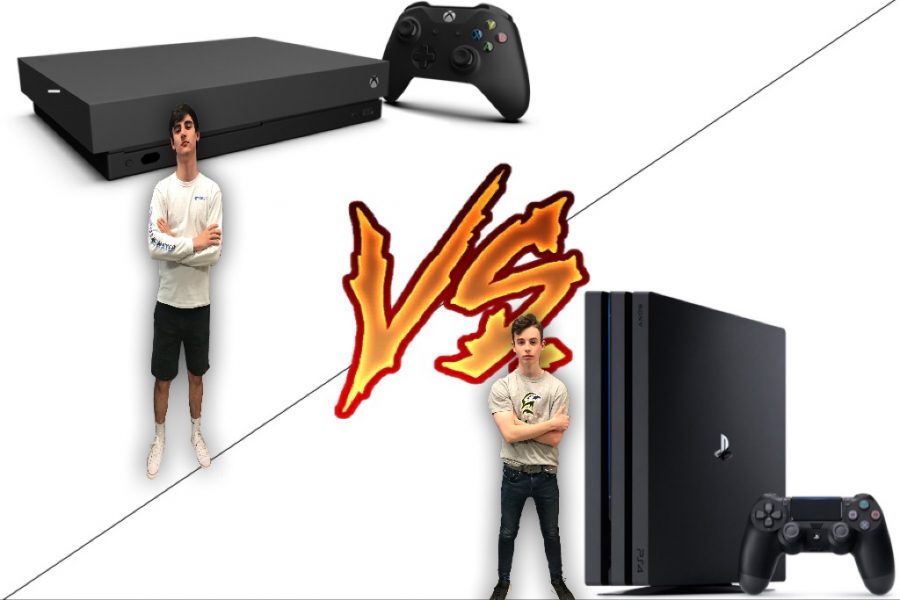 by Jacob Bolger and Ethan Hart

As video games become increasingly popular, two different consoles have risen to a competition similar to Batman vs. Superman, or Coke vs. Pepsi. The PlayStation 4 (PS4) and Xbox One lead the market today with 69,635,004 total sales for the PlayStation, and 34,156,108 for the Xbox. Both consoles sport fantastic features and are widely played by many across the world. The question is, which one is better? In this comparison, Editor Jacob Bolger sides with the PlayStation 4, and Editor Ethan Hart sides with the Xbox One.

The PS4 largely outsells Xbox by 30 million units (as of November 2017). Both of the consoles are crushing the rest of the market, with the third-most unit seller being the Nintendo Switch, coming in at approximately 10 million units, far behind the Xbox and PS4.

However, the most popular console shifts in favor of the Xbox. In a Twitter poll taken by Lancer Media,  57% of voters chose Xbox One over PlayStation 4, which garnered 43% of the votes.

On a larger scale, GameSpot.com took a poll to see which console was more popular. The results show that 70.5% of voters choose the PlayStation as their go-to console, an easy majority over the Xbox.

Despite Microsoft being a much larger company than Sony, the Xbox is outsold by more than a 2:1 ratio. This is because the Xbox One debuted on the market priced at $499, while the PS4 opened with a $399 price tag. Microsoft didn’t help their case by recently releasing the Xbox One X for a hefty $499, while Sony priced their PS4 Pro at $399. Microsoft is regularly undersold by Sony, which accounts for the lopsidedness of the console sales.

Both systems come equipped with very similar graphics processing units, and both feature 8gb of RAM to power the systems. Although very similar on paper, the PlayStation 4 manages to run games in higher resolutions in some cases, such as The Witcher 3: Wild Hunt, Just Cause 3, and many games in the Assassin’s Creed franchise. However, since the consoles’ initial release, developers have (for the most part) managed to get games to run in the same resolutions across both platforms.

In the years following the release of the Xbox One and the PlayStation 4, the Xbox One X and the PlayStation 4 Pro were released. These consoles feature much improved graphics processing units, placing them in a category of their own that oddly sits alongside their less powerful, but not forgotten, counterparts. While the original consoles typically play games in 1080p resolution, the new consoles are generally able to run games in 4k with a higher framerate.

Although the PlayStation 4 Pro is undeniably better than the original PlayStation 4, the Xbox One X clearly surpasses the PlayStation 4 Pro in the battle of super consoles. It is far more powerful, and plays games in true 4k resolution without sacrificing frame rate in the process. Newer games with enhanced visuals for the Xbox One X such as Star Wars Battlefront 2, Call of Duty World War II, and Far Cry 5 look beautiful on the Xbox, giving the user a beautiful gameplay experience

The Xbox One controller, in contrast to the PS4 controller, appears much more sleek, with an updated ergonomic design. It fits beautifully in hand and is easy to grip, thanks to texture on the joysticks and the sides of the controller. The PS4, while sporting ergonomic banana-shaped handles, is harder to use for gamers with larger hands. The PS4 updates on a lot of the old technology used in their previous controllers, such as the touchpad and a mono speaker. According to Vrzone.com, who compared the Dualshock 4 controller to the Dualshock 3 controller, they found the touchpad in the Dualshock 4 to be quite an upgrade. This touchpad allows multi finger scrolling and can perform functions such as pinch to zoom and navigation, just like a traditional touchpad” Hard to handle triggers are a downside for the Dualshock 4, which are less easier to handle than the Xbox One controller. The Xbox One’s more protruding triggers allow users to feel the action of pulling the trigger in a game.

When it comes down to it, the choice of controller comes down to personal preference. If you want the best technology for a controller, the Dualshock 4 looks and feels very futuristic. But in all, the Xbox One controller offers the best functionality and fits in your hand like a glove.

All video game consoles have certain games or game franchises which are exclusive to their platform, such as the Halo series on Xbox or the Uncharted series on PlayStation. Many of these console exclusives span several console generations, meaning that one of the series’ games was available on either the Xbox 360 or the PS3, and a new version of the game is now available on Xbox One or PS4.

The Xbox One houses a number of quality console exclusives, such as Super Lucky’s Tale, the uber popular Halo series, the Forza racing series, the Gears of War series, Titanfall 1 and 2, and the newly released Sea of Thieves.

Some of the best exclusives currently available on PS4 include Uncharted 4: A Thief’s End, The Last of Us Remastered, Horizon Zero Dawn, and God of War.

Although the PS4 outnumbers the Xbox in the total amount of console exclusives, the Xbox One has proven to have the more commercially successful games, such as Halo 5: Guardians and Forza Horizon 3. PS4, with the addition of God of War and the Uncharted franchise, have recently strengthened their collection of console exclusives. These games result in this category ultimately being a tie for both consoles.

Both of these machines are symbolic of massive advancements in technology, and provide both great gaming and multimedia entertainment experiences for users. However, when deciding between the two, there is no obvious and uncontested winner.

The Xbox One has more options for media viewing, a better controller, and some incredible first party exclusives. However, the PlayStation 4 is better designed, is more powerful, and also has its fair share of first party titles. Consumers must make an educated decision between the two by weighing in the pros and cons of both systems.

In the end, both are gaming systems, and the choice should be made by deciding which console’s exclusives appeal to you most and choosing the platform which the majority of your friends play on. There is no wrong choice when buying a console, and you will be happy with either of the two.