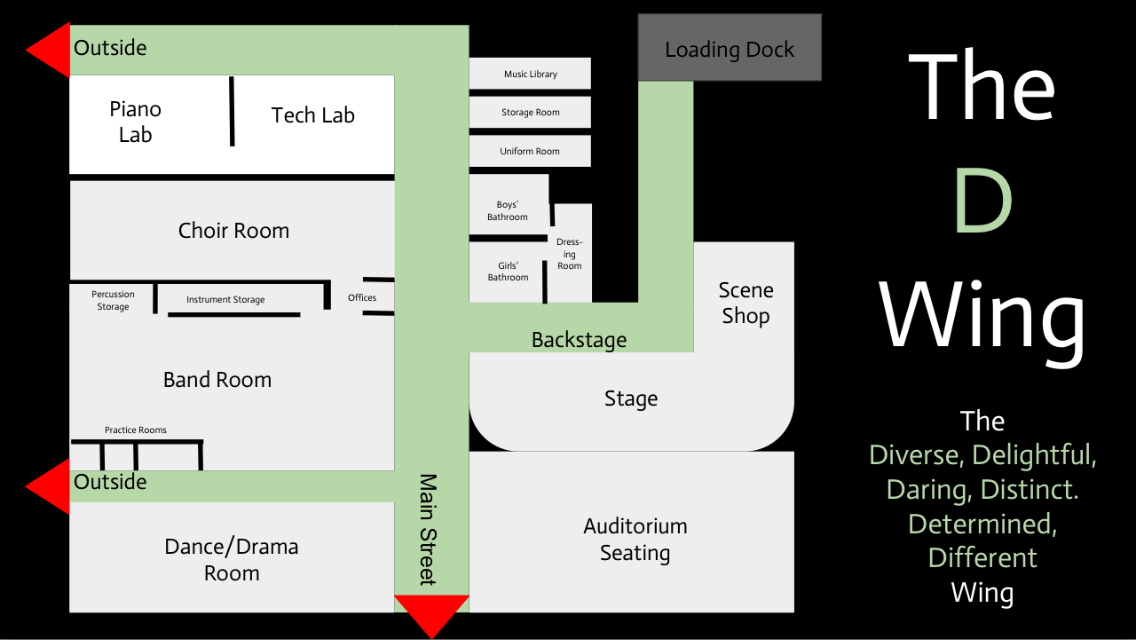 A clearer map of the D Wing for reference

Many kids who are not involved with performing arts may not even set foot down the D wing hallway at LHS. Most walk through the front doors and pass by the entrance to the hallway each day.

The D wing houses the performing arts classes (for the most part) and entrance/access to the auditorium and stage.

What would you find if you go down the D wing?

First and foremost, there is a small zig zag in the hallway. Going to the right gives you entrance into the lower level of the auditorium.

Ahead is a door, providing a stairway to the mezzanine (balcony) of the auditorium. If you continue up that flight of stairs, there is access to the catwalks, mainly used as storage.

To the immediate left is the drama and dance room. This room has a small set up of three rows of theater chairs, large mirrors for dance, and some curtain equipment.

The classes that take place in this room are the drama classes and dance classes (when not on the stage). It can be a black box performance space as needed.

Continue down the hallway a little more and you will find a hallway on the right that has another door to the drama and dance room, and at the end leads to an exit. To the band students, these are known as the band doors. During marching band practices, these doors are the entrance and exit.

Back at the intersection of this side hallway and the D wing, there is a double door entrance into the band room.

This room has several side rooms. To the left side walking in, there are three practice rooms. These rooms are great to practice music in in small groups.

Back in the hallway, there is another entrance to the auditorium’s seating area a little past the first set of band doors.

Down the hallway a little more is an access to the stage (on the right side) and the other band room entrance.

Past that is a hallway to the right that leads all the way down past a turn to the loading dock, scene shop,  and a few custodian offices.

Past this hallway entrance are bathrooms on the right side.

On the left side is the last major classroom, the choir and orchestra room.

The choir class is housed here during the first semester, while the string orchestra and symphonic orchestra live here during second semester. This room has a set of risers and a grand piano.

Down the hallway even more, there are some specialty rooms and two more classrooms.

Some unusual rooms come next. There is a door to the uniform room, which has all the marching and concert band uniforms.

Past that room is another storage room and the music library, all on the right side.

Meanwhile on the left side, there is the entrance to the music technology room. This room has a set of computers with MIDI keyboards and headphones for recording and playing music.

Connected to this room in the back is the piano lab, where there are more of the computers with MIDI keyboards and headphone sets.

In the far reaches of the D wing, there are some janitorial and utility facilities.

And that concludes the D wing! Although, you may be wondering… why take a music class?

Mr. Dye, the choral and orchestral director said, “We have all kinds of opportunity for performance here. And you’re in a class with all different grade levels.”

This is true. For all music classes (except the freshman band, second semester concert band for freshman), each class is a mix of freshmen to seniors.

Mr. Lloyd adds, “Students in a music class are happier, more productive, get better grades and have better attendance than those who are not.”

Linganore has many groups and classes specific to the school. For example the equipment accessible to the Music Technology class is exclusive to Linganore.

There are many great reasons to join a music class, but most of all, it is a great way to let your creative side grow if visual art may not be your thing. And they are fun classes too!