Lancer of the Week: Olivia Weinel is the Queen of the court 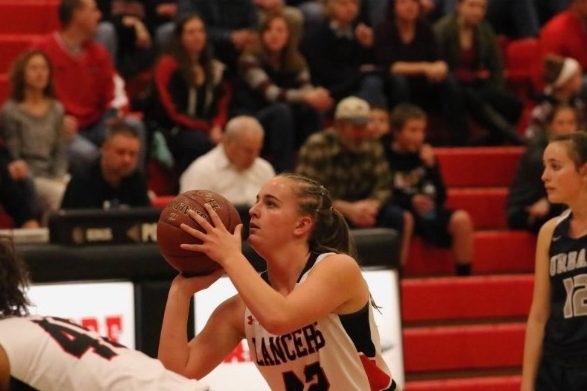 Olivia Weinel, member of Class of 2018, is an outstanding athlete and student. Weinel plays for the varsity basketball team, has a 3.9 GPA, and was crowned 2017 Homecoming Queen.

Weinel has been playing basketball for eight years. She played for the Germantown Lady Panthers club team for one year, which is one of the top club teams in DMV.

As a taller player, Weinel is a skilled rebounder and has many opportunities to score in the paint. She racked up a total of 116 points on varsity last year for Linganore.

Coach Rachael Easterday, the head coach for the varsity girls team, said, “Olivia is always ready to learn something new and works really hard until she can accomplish her goals. Olivia has improved over the last four years and has become a very dynamic player.”

Weinel is looking forward to this year’s season and improving her skills. She said, “I can’t wait to be back and play with all the girls. I hope to get far this season.”

Recently, Weinel announced her commitment to continue her basketball career and further her education at  Shenandoah University. Shenandoah ended with a 6-21 overall record in the 2016-2017 season.

Weinel is planning to major in psychology and criminal justice, and wants to pursue a career as a profiler for the FBI.

At school, Weinel is involved in the SGA and is a member of the National Honor Society.

“Olivia is a student all teachers would like to have. She comes to class prepared, she pays attention, always asks good questions, and is overall fun and an engaging student,” said psychology teacher, Samira Diggs.

Olivia was crowned the 2017 Homecoming Queen out of five girls on the homecoming court. She was nominated by many friends because of her outstanding attitude.

Weinel said, “I was so surprised and shocked and extremely happy when they announced me as the Queen.”

If you know a Lancer that deserves to be recognized, nominate them through Lancer Media on Twitter, @LHSjournalism.