Honoring our history, the right way 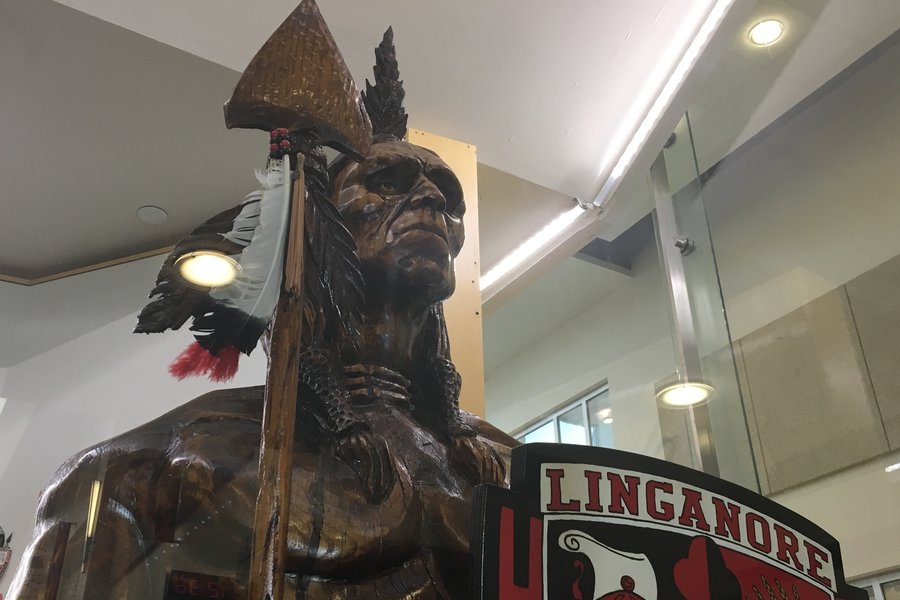 The totem under the stairway of LHS depicts a Native American warrior holding the Linganore shield.

When I went to my first Linganore football game, I loved The Tribe. I loved how excited the crowd got, the feeling of community and togetherness. However, that feeling didn’t come from the headdress. I understand that it is an important symbol, but if it can be taken as offensive, and its intention really is to be honorable, isn’t it better to respect that?

Due to the laws and policies that were imposed on them by non-Indigenous governments, Native Americans have had little say over their own affairs, particularly over the use of the objects of their cultural heritage. As a result, misappropriation of Indigenous forms of expression has been particularly widespread and harmful.

“We see feathers as gifts from the Creator,” said Juan Boston, vice chairman of the board of directors at the Baltimore American Indian Center in an interview with the Frederick News Post.

“Receiving an eagle feather is seen as sacred, and one of the highest honors one can receive. To earn enough feathers to fill a headdress like the ones often seen in popular culture, one would have dedicated years of service and battle to the Native American community.

“I’m 58, and in my life, I have received one eagle feather. When you see some people wearing a headdress jumping around like a monkey yelling like an idiot, it is disrespectful to our culture. It’s like if someone were to wear an Army general’s uniform and parade around jumping and yelling making a mockery of it. The outcry would be incredible,” said Boston.

Using the headdress doesn’t “honor” Native American tradition–it glorifies the image of the Native American people as savages. The stereotypical representation turns them into artifacts of history, instead of real people who still suffer today. Native Americans are not spear-toting, feather-wearing warriors to dress up as. They are a people who were systematically oppressed and still suffer from that oppression today.

When the emphasis on Native American tradition focuses solely on their past, then it fails to recognize their present. It makes it nearly impossible for their current issues to exist in the public mindset.

Principal Nancy Doll, The PTSA, and the Alumni Association want to find a way to honor the Native American roots of Linganore high school in a way that isn’t offensive. The school is considering putting the headdress in a display case with an explanation of Linganore’s relationship with Native American culture and the importance of the headdress in a “Heritage Room.”

Native American cultural appropriation and racism in mainstream media has been coming into the spotlight recently. It is being recognized that treating Native Americans as a mascot isn’t acceptable. Offensive practices are being fought against, such as the debate about the Washington Redskins–a team whose name is literally a Native American slur. Naming a football team “The Slaves” wouldn’t be acceptable, so why shouldn’t these circumstances be treated the same?

The Tribe takes a lot of pride in the tradition and wearing of the headdress. However, understanding the cultural significance of it doesn’t make wearing it okay. If The Tribe really wants to honor Native American tradition, they need to find a different way to do it.

The Tribe is more than the headdress. The Chief doesn’t need it to prove himself as a leader. If something as flimsy as a costume store prop holds together the ties of Linganore High School, doesn’t that say more about our school than anything else? Furthermore, we shouldn’t be basing our ties as “One Tribe” on something so controversial.

If Linganore wants to honor its roots, we’ll need to do it in a more respectful way.