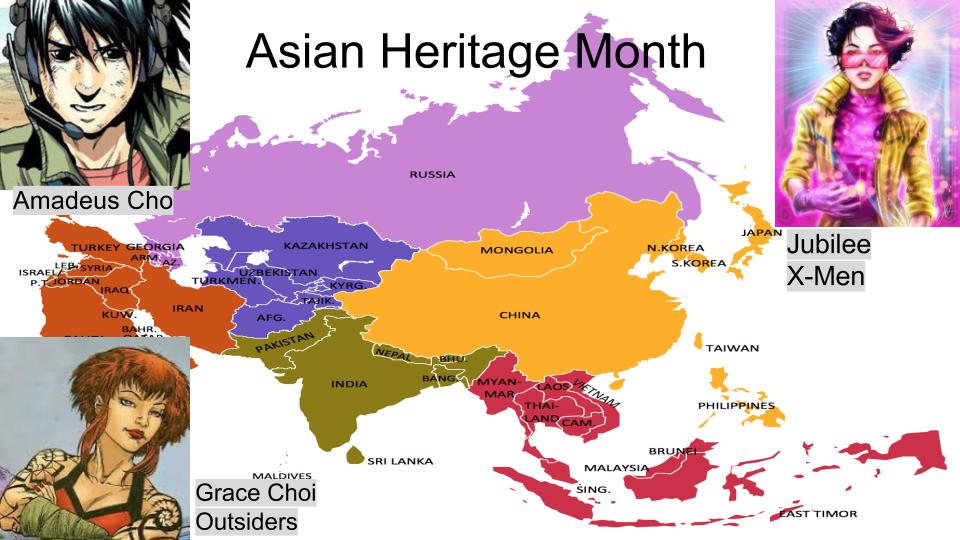 The month of May is also known as Asian American Heritage Month. For this blog, we´ll be talking about Asian superheroes. The Asian heroes we´ll look at today are Amadeus Cho, Jubilee, and Grace Choi.

Amadeus Cho is a Korean-American who was born and raised in Tucson, Arizona. His parents emigrated from South Korea. As Amadeus grew up, his intellect increased. Amadeus learned most things on his own, leading to him becoming highly cultured at a young age. When he was 15-year-old, a soap company help an online contest to reward young geniuses. Amadeus easily won the contest, winning $5,000 and first place.

The hidden reason to the online contest was for Pythagoras Dupree. The reason being that Dupree wanted to other child geniuses and eliminate them before their intellect might equal or surpass his own intellect. Since Amadeus won the contest, Pythagoras tried to  eliminate him by blowing up his house. The resulting explosion eliminated Cho´s mother, father and sister. Amadeus ended up living on road with his coyote pup companion.

Jubilation Lee, Jubilee, is a member of the X-Men. As a child Jubilee was an orphan who ran from her orphanage and hid in a Hollywood shopping mall. In order to survive, she had to steal food and and water. Jubilee ended discovering her mutant abilities while running from mall security.

When Jubilee manged to escape mall security, the mall security hired a mutant bounty hunter gang, M-Squad, to catch her. Jubilee held her own, but ended being saved by X-Men members Dazzler, Psylocke, Rogue, and Storm. Afterwards, Jubilee followed the X-Men through a portal to the temporary X-Mansion in the Australian Outback. Jubilee´s powers consist of firing blinding and explosive ¨firework¨ like energy from her hands.

Grace Choi is a Bana Amazonian. This explains Grace’s exceptional strength and resilience. It is also worth noting that Grace Choi is a bisexual. Choi survived a prostitution ring that exploited abducted runaway children. When Grace reached puberty, her powers developed. She used newfound powers to escape. After escaping, Grace lived independently working as a bouncer for the nightclub Chaney´s.

Choi was convinced by Nightwing to join the Outsiders after they told her her pay would be three times that of a nightclub bouncer. Choi´s powers consist of superhuman strength, speed, durability, stamina, and healing. She´s also an advanced hand-to-hand combatant.