Pat Carson: A familiar face with a unfamiliar backstory 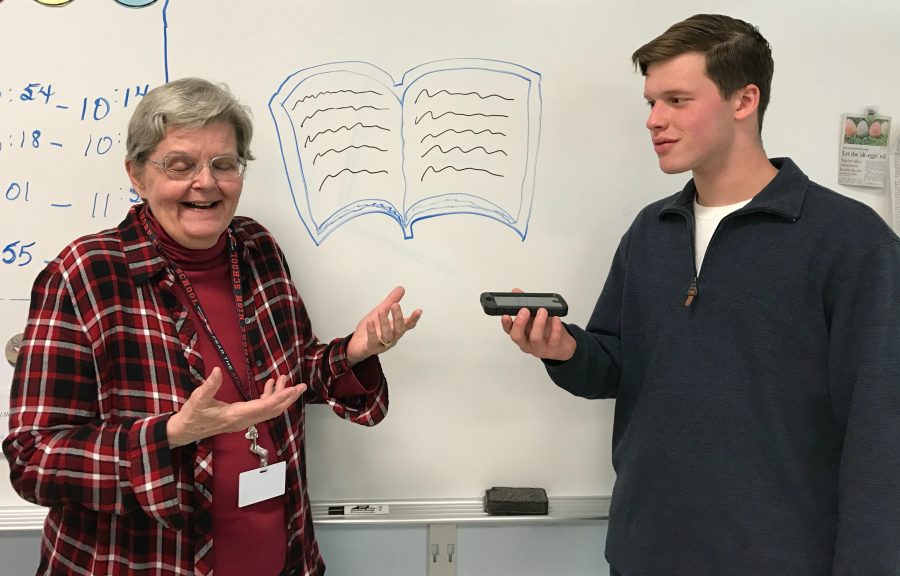 Pat Carson and Matt Gelhard chat about her job as a substitute.

Pat Carson is in the halls so often that most students probably think she is a staff member. Carson substitutes almost every day for many classes at LHS. She might be a familiar face around Linganore, but how many can boast a family connection?  I can.

Pat Carson grew up in Chicago, with her mother and father. She roamed the house with seven girls and five boys.

Before she moved to Maryland, she worked for West Virginia senator Robert Byrd. She did office work for the senator and that was no easy task. She loved being on Capitol Hill, from taking the train to just looking at all the nooks and crannies of the important buildings.  Back then, security measures were not as strict as today.

She subbed at many schools, including the old Linganore, when her children were growing up. It was her part-time job–her main job was to raise her children. She subbed at South Frederick Middle so much the school opened an opportunity for her to become a media aid at the school library. This eventually brought her to Wilde Lake High School in Columbia, MD, where she was the media specialist for the next 11 years.

She retired happily for six months, but she says she was bored, so she went back to substituting for Linganore High, after she read  that Linganore was struggling to find substitutes.

Carson is very interested in the world of literature. She’s a bookworm at heart and admires great writers and historians for their works. “The more we know about culture and our past can benefit us in the future,” Carson said.

She also is interested in her community. She took part in supporting the Boy Scouts in Libertytown.

An icon of hers is her father. He was a man who could be stuck in the middle of nowhere but still could have made friends. This rubs off on Carson in her outgoing nature. She is not afraid to smile and say hello.
She loves to work with high school students, and loves to work with the kids at Linganore, which keeps her coming back to substitute. Having connections with other teachers in the past from her children and her own experiences. Also knowing individuals from this school that have make a difference in our world brings her joy.