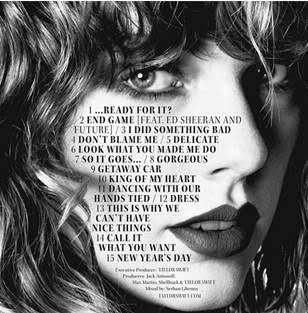 by Yesenia Montenegro , Reporter
The short URL of the present article is: https://lhslance.org/14v7u

A brand new sound: Taylor Swift’s highly anticipated new album Reputation was released November 10. With 15 new songs on her sixth studio album, we get to hear a totally different kind of music from Swift.

Swift has gone through an extreme transformation, but even though she and her music have changed, I still think that she a most talented singer. Her music shows that she has a strong voice, unlike auto-tuned singers.

After her past album 1989, it is easy to tell that Swift is trying to move as far from her country music roots as possible. 1989 was the start of her career as a pop artist, which she is continuing with Reputation.

This album is something we’ve never heard from Swift. It sounds nothing like her past ones and has a completely different mood to it. This album is definitely more serious and calm.

Her first album Taylor Swift came out on October 24, 2006 and the three albums that followed all consisted of country songs. With Red she slowly started moving away from the genre and with 1989 her sound totally changed.

Reputation starts with the song “…Ready for It?,” a song about Swift breaking free from what the media depicts her to be. I feel this is the best song on the album. I really like how the beat changes throughout the song and she changes the mood of it. This song was the second song to be released with a video and as soon as it came out, fans started decoding the “hidden” messages in it.

One main point of the video is Swift wearing a “nude robot suit.” She chose to wear this throughout the video to show her strength and portray the theme of the song. At first it caused a lot of commotion because fans had mixed feelings about it. I think it added more meaning to the video because she was able to use her outfit to show how she wanted to be seen.

Swift is known for referencing past boyfriends or relationships in her music. Fans have spent their time deciphering what song was about what boyfriend and what the messages in her music videos mean.

The most familiar song from the album is “Look What You Made Me Do,” which was released August 25. It got a lot of attention, since Swift hasn’t released any new music for two years after 1989.

The most memorable line from the song is spoken, “I’m sorry, the old Taylor can’t come to the phone right now. Why? Oh, ’cause she’s dead!” Swift explains that she wants to be a new person and that she wants her listeners to see her new style.

So far, the album has had mixed reviews. Some listeners love the new music, while others feel it’s not her best work. It has a rating of four stars on iTunes.

I really enjoyed listening to this album because all the songs have a story. She showed a lot of emotion and expressed her feelings through her music.

One listener and member of the Class of 2020, Emma Howard said, “I think she’s trying to sound too much like other pop singers. In her older songs her sound was more unique and she sounded different than other singers.”

In past songs Swift showed more range in her voice, while in this whole album, her voice sounds a little different than fans are used to. It makes her sound more similar to other artists and makes it harder to distinguish her voice.

Billboard reported that her album sold 1.05 million copies in the first four days, which makes it the most sold album of the year. Before Swift, Ed Sheeran’s album Divide had the most sales, with 919,000 units sold.

Since fans hadn’t heard music from Swift in a little over two years, there was a lot of excitement surrounding the album. Everyone wanted to hear it as soon as it came out. Swift had made it very mysterious what the rest of the album would sound like after she released the first song.

The Reputation Stadium Tour has been announced to start on May 8, 2018 in Glendale, Arizona. The first 27 stops on her tour were announced on November 13, 2017.