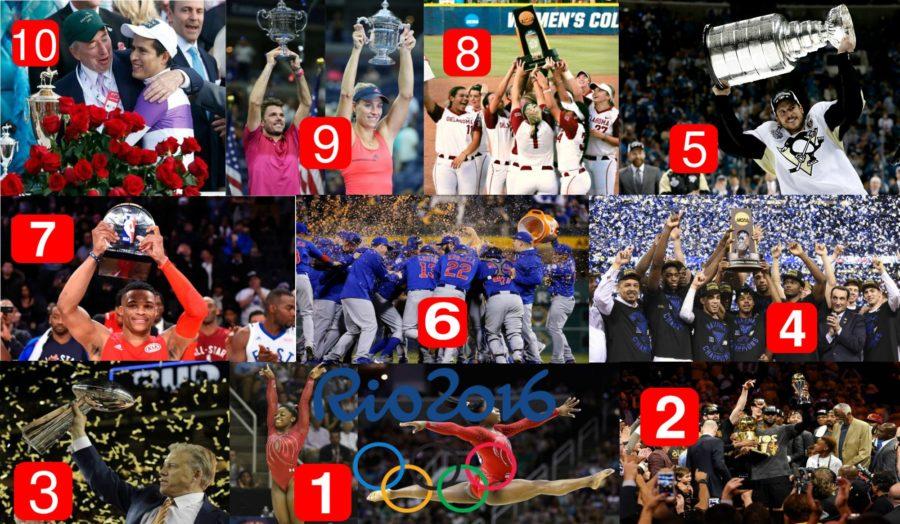 It was a remarkable year for sports, including the Rio Olympics, a record-breaking World Series, and a March Madness ending with Villanova upsetting the national favorites. Here’s a view of 2016 in sports.

The 142nd Derby was held on May 7, in Louisville, Kentucky at Churchill Downs. This year the winner came out of gate number 13, Nyquist. Nyquist’ rider was Mario Gutierrez for a mile and a quarter to come out in first place. Nyquist was trained by Doug O’Neill.

This year was the 136th Open, and it was held in New York City, New York. Both winners of singles for the Open were from Germany. The male is 31, Stan Wawrinka, who beat Novak Djokovic for the championship. And the female is 28, Angelique Kerber, who beat Karolina Pliskvoa for the title.

The World Series is held in Oklahoma City, at the ASA Softball Hall of Fame. This year the University of Oklahoma didn’t have to go very far to bring home the trophy, they got to play in their hometown. This is the second WCWS they have won in the past four years. Oklahoma began playing games in the WCWS on May 20 with the first defeat over Wichita State 7-2, and finishing on June 8 with the win over Auburn 2-1.

The 65th NBA all-stars met in Toronto, Canada for the West vs. East game on February 14. The West roster held 12 players and East held 14 players. West won the game 196-173. Russell Westbrook, a player from West, took home the MVP trophy for the second year in a row. Westbrook is a guard, from the Oklahoma City Thunder. He finished the game with 31 points.

The Chicago Cubs took home the trophy this year for the third time in Cub history. It was a very close game, back and forth, until the Cubs had two 10th inning scoring runs from Ben Zobrist and Miguel Montero and a game-ending grounder fielded by third baseman, Kris Bryant. The final score was 8-7.

Captain Sidney Crosby took the Stanley Cup into his arms after the Pittsburgh Penguins took the win over the San Jose Sharks 3-1. The rookie goalie, Matt Murray, had 18 saves. He lead his team with a .963 save average for the year. This was the Penguins 4th Stanley Cup.

The NCAA DI men’s basketball championship hosts 68 teams beginning on March 15. The tournament was played until April 4, which is when the championship was held. All of these games were single elimination meaning every game that is played the loser goes home. When narrowed down to the Final Four it was Villanova and Oklahoma, and North Carolina and Syracuse. The winners that came out of those games were Villanova and North Carolina who played for the championship. A very nail biting game with a score of 74-74 with only 3 seconds left in the game, a game winning three-point buzzer beater from 22 feet, time running out while the ball was traveling through the air. It was made. Villanova won with a score of 77-74.

A very unexpected win from the Denver Broncos. The Carolina Panthers were the highest scoring team of the 2015-2016 football season, and the Broncos won by 14 with a score of 24-10. The Broncos took an early lead over the Panthers and never trailed. Broncos’ Von Miller was named the Super Bowl MVP. This game was played on February 7, and Payton Manning announced his retirement on March 17. He ended his career right, with the 2015-2016 Super Bowl ring.

The Golden State Warriors had home court advantage because they had a better record, 73-9. This was game seven that the Warriors and Cleveland Cavaliers played in. Both teams tied with three wins, so this was the game that would break the tie. The starting line up for the Warriors was Stephen Curry, Klay Thompson, Andre Iguodala, Draymond Green, and Andrew Bogut. And for the Cavs it was Kyrie Irving, J.R. Smith, LeBron James, Kevin Love, and Tristan Thompson. The Cavs came out with the win over the Warriors with a score of 93-89. LeBron James of the Cavs was named MVP for the tournament, he averaged 25 points, 7 assists, and 8 rebounds per game.

Simone Biles is a 19 year old Olympic gymnast. She was born and raised in Columbus, Ohio and is only 4’9.” Biles made as show-stopping appearance this year in Rio. She took home 5 medals, four gold, and one bronze. She won gold in best individual all-around, vault, and floor. She is known as one of the best gymnasts of all time because she is one of four women to win five medals in the Olympics.