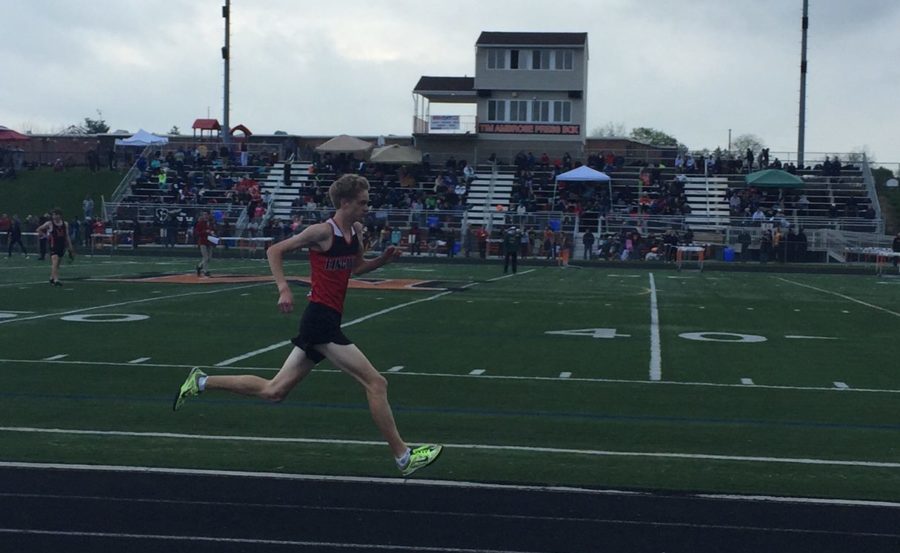 Micah Hewitson leads the pack to a county title in the 1600 meter run at the Frederick County Championships.

Matthew’s continued to jump into the top ten with a ninth place finish in the long jump for her jump of 14-04.

Badostain anchored the girl’s 4×100, out running Brunswick’s anchor in the last seconds of the race, clinching a time of 53.84 for her team, only 3.22 seconds shy of the state qualifying time of 50.62.  With regionals in the near future, Badostain and her teammates plan to improve their hand-offs, potentially allowing them to shed the seconds needed to punch themselves four tickets to the 2016 Outdoor State Championships.

On the other side of stadium, Class of 2016 member, Sabrina Moxley, earned herself a seventh place finish in the discus finals with an impressive throw of 77-05.

Linganore was able to put up multiple title winners on the men’s team.

Helping them to their strong finish, was Class of 2017 member, Micah Hewitson.  Micah Hewitson came into the outdoor season as the Frederick County cross country champion from the fall, as well as the runner up at the 2016  MPSSAA 3A Indoor State Championships in the 1600.  Micah is also known for his impressive, recent 3200 PR of 9:40, as well as his long time rivalry with Oakdale runner Evan Kowalk.  The two have ran together since they were little and ran for the Lightning Running (Club).

Hewitson went 1-1 in the Hewitson-Kowalk match up, just missing the 800 title by less than a second with a time of 2:01.26.  However, his early surge to the front of the pack, giving him a lengthy lead, won him the 1600 title and a new PR of 4:24.81, Kowalk was about six seconds behind.   Micah was also able to outrun the distance duo of Nicholas Danner and Garrett Santis of Urbana.

Micah also anchored the 4×400, helping his teammates, Class of 2016 member Thomas Lang and Class of 2018 members, Clay Buckman and Lars Eklund,  to a second place finish. While happy with his performance Wednesday night, Hewitson has even bigger goals for regionals: Win the 3200, 1600, and the 800 titles, as well as break 2:00 in the 800.

Despite his recent PR, Hewitson opted out of the 3200, giving him a chance to focus on his 800 and 1600 meter efforts.  However, the 3200 title was not swept by Urbana hopeful, Nicholas Danner, but instead Hewitson’s teammate, Class of 2019 member, Michael Belmaggio.

While only a freshman, Belmaggio has already developed a solid strategy that lead to his fourth place finish in the state for the indoor 3200, as well as this year’s county title.  Belmaggio was able to stick with Urbana’s Danner and  Santis, until the last two laps, where he inched in front, snatching the title from the two seniors.  He crossed the finish line with an impressive time of 9:56.09.

Lang’s teammate, Class of 2016 member Jack Wilkerson, finished right behind Agyei-Obese with a time of 23.99.  Class of 2018 member, Clay Buckman barely missed the finals with a ninth place finish of 23.81 in the prelims. Lang also added a second place finish in the triple jump to his resume, posting a 42-09.00 behind Oakdale’s George Stultz.

Also jumping his way to a second place victory, was Class of 2018 member, Lars Eklund in the high jump.  Eklund came into counties, the favorite to win with a PR of 6-02.00.  Eklund was able to jump 5-09.00, the same height as first place winner, Trenton Snipes of Governor Thomas Johnson High School.  However, the number of attempts each jumper took, was what differentiated the athlete’s place in the end.

Although Eklund’s goal was to win the county high jump title, he’s hungry for the regional high jump title and is satisfied with his second place title.  At regionals, he plans to stick with his current strategy of waiting to come into the competition until the bar has been raised to 5-06.00 or 5-08.00, giving his competitors time to tire out.

Travis Thompson also earned team points with his sixth place finish in the 300 hurdles.  He hurdled through to the finish line with a time of 45.26.

While all the excitement on the track was occurring, Class of 2016 member, Tyler Fleagle, and Class of 2018 member, Francisco Bustamante, earned fifth and ninth place finishes with throws of 42-07.00 and 37-09.00.

With a tenth and fourth place team finish under their belts, both Linganore’s girls and boys track teams walked out of Middletown, ready to improve for regionals on May 18th and 19th at Urbana High School and hungry for more.