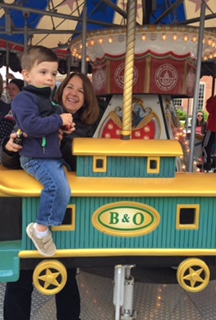 Principal Doll with her grandson on a carousel.

The short URL of the present article is: https://lhslance.org/1gie3

This story is part of Lancer Media’s fall series welcoming new staff.  We enjoyed learning about many teachers but apologize that we were unable to cover every new teacher.

Ms. Nancy Doll has been an administrator for 20 years in Frederick County Public Schools. While she has never been a Lancer before, many students have experienced her leadership.

Doll wants to promote student success and positive experiences for everyone while she is at Linganore.

Doll has worked with former principal David Kehne multiple times. When she was the assistant principal at Urbana High School, Mr. Kehne was an English teacher. Kehne said,  “She always seems to remember seemingly small details about a person which tells me she sincerely cares about others. It doesn’t get much better than that.”

When Doll was in high school, she was in band and was a majorette. Doll said, “We had a big majorette section. We were the twirlers because we didn’t have a color guard.”

This summer Doll had the daunting task of moving all of her school belongings from Brunswick to Linganore, but normally Doll would be traveling in the summer. Doll has traveled all of the world, but her favorite adventure was visiting China. For Doll’s 50th birthday, she went to Italy for two weeks. “It was so pretty there,” said Doll.

Doll’s favorite candy is York Peppermint patties.  Doll’s favorite movie is Bridget Jones Diary. She loves the movie  because it’s dorky and funny. “I’m so excited about the new movie that is coming. All of the dorky things in the movie remind me of myself,” said Ms. Doll. Bridget Jones Baby will premier in theaters on September 16, 2017.

Along with Adele, Dwayne “the Rock” Johnson, and Queen Elizabeth, Doll’s astrological sign is a Taurus.  Doll said, “I kinda agree with my sign. Sometimes I can be a little stubborn, but I think that I go with the flow a lot, too.”

When she isn’t at school, Doll enjoys water activities, including kayaking, swimming, and paddle boarding.