Milburn reflects on the legacy and loss of LHS NJROTC 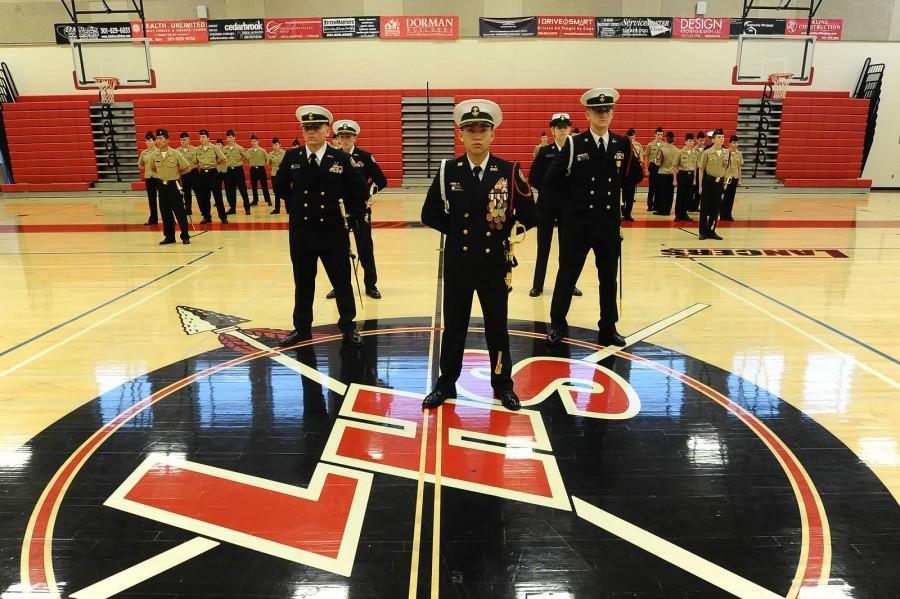 On January 14, the LHS NJROTC announced that FCPS is requesting permission from the U.S. Navy to move the NJROTC program to Governor Thomas Johnson High School.  The Lance invited members of the NJROTC to reflect on the impact of the program on their lives.
“If a man does his best, what else is there?” –Gen. George S. Patton, USA

As a senior and part of the Class of 2015, I have seen some of the greatest glories and the bitterest downfalls of the Linganore High School Navy Junior Reserve Officers Training Corps.

My class was the last class to have been taught Naval Science 1 by Master Sergeant Alvin Pridgeon of the United States Marine Corps. My class saw the arrival of Chief Hospital Corpsman Michael Rodrigues of the United States Navy. My class has been to state, regional, and national championships for marksmanship, drill, and orienteering.

And my class will be the last class to have had the opportunity to participate in NJROTC at Linganore High School. These changes, victories, and defeats aren’t exclusive to my class: they are all pieces of the legacy of Linganore NJROTC.

As a rising freshman, I never would have anticipated the position that I am in right now. I took Naval Science as an “Easy-A” because a senior said it was so when I went to registration night in 2011. I had an empty block in my schedule and nothing to lose so I figured, “Why not?”

I was never a competitive type: I used to play baseball, but just for fun until it became all about winning. NJROTC offered teams that were more about having fun, meeting people, and going places; winning was secondary.

In the summer of eighth grade, I had long hair, a quasi-Fu Manchu, and a chubby body. NJROTC gave me a tight haircut, a clean shave, and a fit form.

I knew I wanted to do something with engineering after high school, but I didn’t know how I’d go about it. NJROTC gave me the means to get an education and a way of getting a secure job: next year I will be going to The Ohio State University’s college of engineering while participating in NROTC so that I may commission in the United States Navy and join the Civil Engineering Corps and the Seabees.

Before high school, I had never done much to lead anything. NJROTC let me lead, first by following. I’ve climbed through the ranks, rising to the senior enlisted cadet as a Cadet Chief Petty Officer. Then I earned the job of Training Officer with the rank of Cadet Ensign. As a graduating senior, I am the Commanding Officer of the Linganore High School NJROTC, and I have had the opportunity to follow and lead many great young men and women.

I have had the honor of following great people in my high school career, and they have taught me lessons that I will never forget. Master Sergeant taught me that you should do everything that you can to get what you want; that you should always do what’s expected of you so you set the precedent of what is good–in effort, in character, and in life.

Chief Rodrigues taught me that you always make the best with what you have, and you never worry about what you’ve done in the past. It is not the greatest that you’ve been able to do, but the latest thing that you’ve done that makes you great.

Commander Lane taught me that experience makes wisdom: every mistake you make and every success that you have will teach you how to handle everything in life. These men never said those outright; it’s what I’ve learned from their living examples.

These leaders don’t treat students and cadets like children: we’re treated like adults who can handle the challenges that life throws at us. These men aren’t just teachers and coaches: they’re mentors, and friends. These men are great, not just for their service to our country, but for the ways in which they conduct themselves and lead our generation.

There is a part of me that says, “I’m graduating, I’m done with this, so whatever happens to the unit, happens. It doesn’t concern me.”

But the bigger part of me says, “This unit has done innumerable good things for me, so I wish the same for it in return.” It would be an absolute travesty for others not to have the same opportunities that I have had.

No one has ever walked out of our unit without being changed for the better.

It is impossible for me describe all of the lessons I’ve learned from NJROTC experience. In short, it’s an acronym that Chief uses: RADM–Respect, Attention to Detail, Discipline, and Maturity. Respect others as you want them to respect you. The smallest things have the biggest effects. There is a proper time and place for everything. It is always best to be the bigger man. Set the example so others can follow it.

I don’t know with any certainty what will become of this unit in the future. If this unit is to be decommissioned (which I truly hope never comes to be), then we will do our best to make this year the best, and I will hope that we can continue to set an example for the other LHS students.

If this unit is to move to Governor Thomas Johnson High School and rise like a phoenix as Patriot NJROTC then it will be for the best. Patriot NJROTC could become what I always hoped Frederick County’s only JROTC could be: an opportunity for greatness that anyone can partake in.

Regardless of what happens, for now I am Cadet Lieutenant Commander Robert Henry Milburn, the last drill team commander, the last rifle team captain, and the last commanding officer of the Linganore High School Navy Junior Reserve Officers Training Corps.

I will lead this unit in its waning months as best I can, and we cadets will do our best to be the best that we can possibly be. When I turn over my command, either to the legacy of Linganore NJROTC or to the first commanding officer of Patriot NJROTC, I will ensure that our unit’s presence at Linganore is to always be remembered. I will ensure that the last of Linganore’s NJROTC cadets can carry on lesson from our school.

The motto of Linganore High School as it appears on our school crest is: “Follow Today, Lead Tomorrow.” I will make sure that our cadets know that they have followed today and tomorrow will be theirs to lead.
“When can their glory fade?

O’ the wild charge they made!

All the world wondered.

Honour the charge they made,

-“The Charge of the Light Brigade” by Alfred, Lord Tennyson