Travel, trouble, or treasure? What’s on your bucket list for 2014? 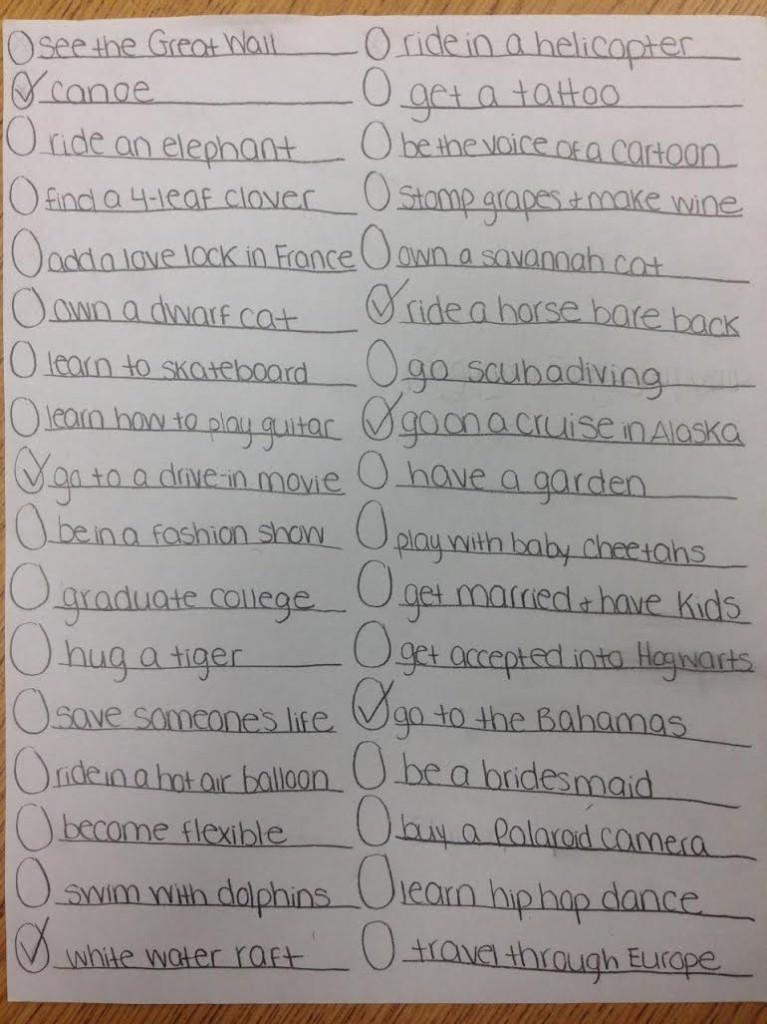 With the New Year coming up, many make new resolutions in 2014. It’s also a perfect time to create that new bucket list.

This is just one of the many adventures she has included on her bucket list: skydiving, traveling to every continent, Scuba diving in the dark, and swimming with sharks–which she almost got to do but an unfortunate change of plans prevented her.

Bucket lists are not necessarily “actual” lists but made up lists of goals to complete within a lifetime. Everyone has dreams they want to achieve before they “kick the bucket.”

“I’ve always wanted to ride an elephant in the water, sleep in the President’s bed in the White House, and jump off a waterfall,” said junior Madison Ambush.

We all have those things that never get done, and in 2013, Ambush said her problem was not staying motivated and slacking off some days.

In 2014 “my goals are to work hard and always motivate myself,” said Ambush.

Senior Kennedy King says her bucket list includes skills she wishes to improve with her music. King said, “My goals for 2014 are to finish recording demos, play more shows, and enjoy life to the fullest.”

Mrs. Ilana Blum, the ninth grade guidance counselor said, “I always wanted to sing and play guitar, but I’m too old for American Idol.” Blum never had a bucket list but said, “As I get older, there are things I want to do when my kids graduate, such as do something different or try something new.”

In 2014 she will consider trying to accomplish something new. Blum used to run and thinks she might want to start again but said, “I’m really slow.” She also hopes to “cook better for my family and be a better meal planner….That’s a ‘mom thing’.”

Tech coordinator Ms. Stefanie Roberts is similar to Blum. “I try to focus only on day to day or week to week goals because it creates a lot of pressure and gets overwhelming,” she said. “It’s better to have a long-term goal to plan out like an athletic goal to run a long race….I signed up for the Nike Women’s half marathon in D.C. in April,” said Roberts, who is dedicated and has already run a 10K to prepare. “If someone says you can’t, it’s a motivation to do it.”

Ambush said, “Everyone should have one [bucket list]. Even if you don’t do it, it’s something to get your mind off the bad things, and it’s things that make you happy.”

“I think everyone should have a goal or something in the future they want to do,” said Blum.

Sometimes it can be a challenge, but Garst said, “If you really want to do it, it won’t be that hard.”

If you get a head start and are already focused on your goals, it’s “not that hard. I am working on mine right now,” said King.

How about Christmas in London? Garst said, “Who knows, maybe I will!”